Abigail Anne “Gibbie” Folger, also called Abigail, was a volunteer, a social worker, civil rights supporter and a member of a popular Folger family. Her great grandfather, J. A. Folger, was the founder of Folger Coffee. Abigail Folger was born on August 11, 1943, and took her last breath two days before her birthday in 1969.

Abigail Folger, along with her four friends including Wojciech Frykowski (her boyfriend), Wojciech Frykowski (a hairstylist), actress Sharon Tate and Steven Parent (18 years old) were brutally murdered. They all were murdered at Tate’s home by a Charles Manson family in August 1969.

Born in San Francisco, Abigail lives with her parents, Peter Folger (head of Folger Coffee Company) and Ines “Pui” Mejia (youngest daughter of the consul general of El Salvador), and her younger brother. Her parents ended up their marriage when Abigail was 9 years old. Her father re-married his private secretary.

From an early age, Abigail Folger was fascinated with arts, playing piano, books and poetry.

Abigail Folger did her honours from Santa Catalina School, Monterey, California. During her college time, she was active with a musical theatre group called Gilbert and Sullivan Players. She was starred in two of the theatre group’s productions. She was graduated from Radcliffe College with honours in 1964. After graduation, she was enrolled at Harvard University and graduated with a degree in Art History in 1967. After getting an art history degree, Abigail Folger started her first job as publicity director at the Museum of the University of California art. She moved to New York from California 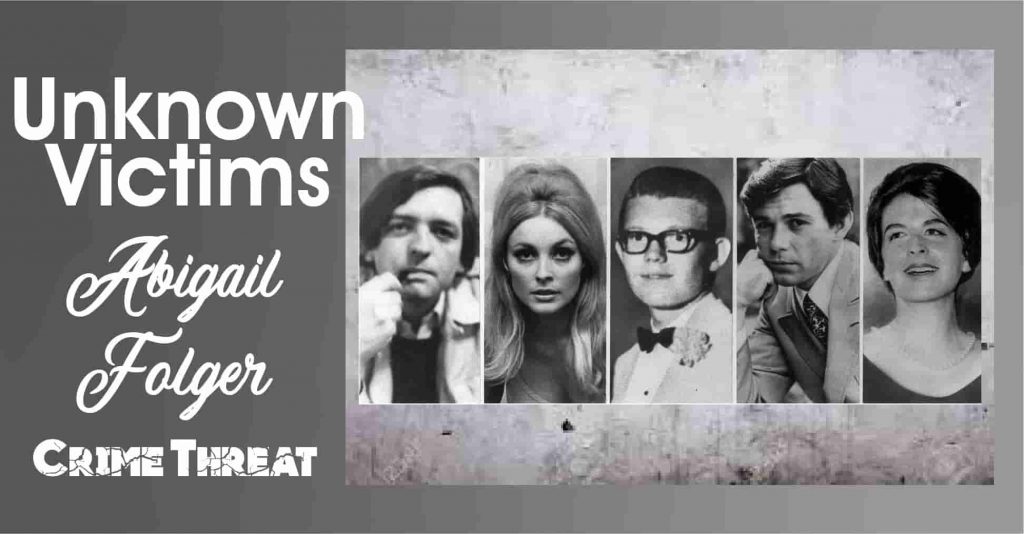 Abigail Folger was very interested in doing social work for people in need. She volunteered at Haight-Ashbury Free Medical Clinic, San Francisco. Later in Los Angeles, she spent her days volunteering with children in ghettos.

From April 1968, Abigail became a political volunteer by volunteering for Robert F. Kennedy presidential campaign. She not only devoted her time but also spent her money on the campaign. The campaign ended when Kennedy was assassinated.

Next year Abigail Folger joined the political campaign of Tom Bradley, contributing both her time and money to it. In late May, Tom Bradley lost from Sam Yorty. His defeat made Abigail disillusioned and she left volunteering at politics. That summer, Abigail Folger actively took part in the civil rights movement.

On August 8, 1969, Actress Sharon Tate was at home while working as a film director in London. Being 8.5 months pregnant, Sharon Tate husband Roman Polanski requested Abigail Folger and her boyfriend (Frykowski) to stay at their place while he is away from home. Folger planned a visit to San Francisco, Loss her birthday was only a few days away. She called her mother at 10 p.m. to let her know that her flight is confirmed for tomorrow. Abigail Folger was staying in one of the guest rooms and was reading a book. Whereas, Frykowski fell asleep on the couch.

Frykowski was awakened by someone point a gun at his face. Upon asking the man who he was the Charles Manson follower answered that he is the devil and he is here to do what the devil does. The next morning, when Polanski’s housekeeper came to the house, he found dead bodies everywhere. She ran screaming and pounded on the doors of neighbours.

In the law, Abigail’s body was lying after being stabbed 28 times. She tried to flee when they were cutting her down and Folger wearing a nightgown that was full of blood. Frykowski’s body was also on the lawn with head wounds, he was shot twice and stabbed around 51 times.

Abigail Folger body was taken to San Francisco and her funeral was held the next morning on August 13, 1969. After Folger’s death, it was found by investigators that she left an estate behind her worth $530,000 and left with no will

After months, police was able to catch the Charles Manson Family (the murderers).