Ed Gein was an American infamous grave robber and killer who was inspired by horror films and books. Ed Gein did mostly crimes near his hometown Plainfield, Wisconsin. He loved to steal the corpses of different individuals from his hometown, local graveyards. From these human skulls and corpses, he made unique fashion trophies, accessories, and clothes. He also made mementos from their skin and bones. His all-time well-known movie characters include Buffalo Bill (The Silence of the Lambs), Leatherface (The Texas Chainsaw Massacre) and, Norman Bates (Psycho).

Ed Gein’s full name was Edward Theodore Gein, and he was born on 27 August 1906 in La Crosse, Wisconsin. His alcoholic father and his mom always verbally insulted him, and that is why Gein had a very problematic childhood. Gein’s brother Henry George Gein also teased him in the presence of his mom. Gein’s family moved to a farmhouse that is outside of Plainfield Ghoul around the year 1915. Gein denied working on the farm as he wanted to go to school. After Gein’s father died in the year 1940, he and his brother started working on the farm to support their family. In the year 1944, both of them were burning the bruises near their property one day. 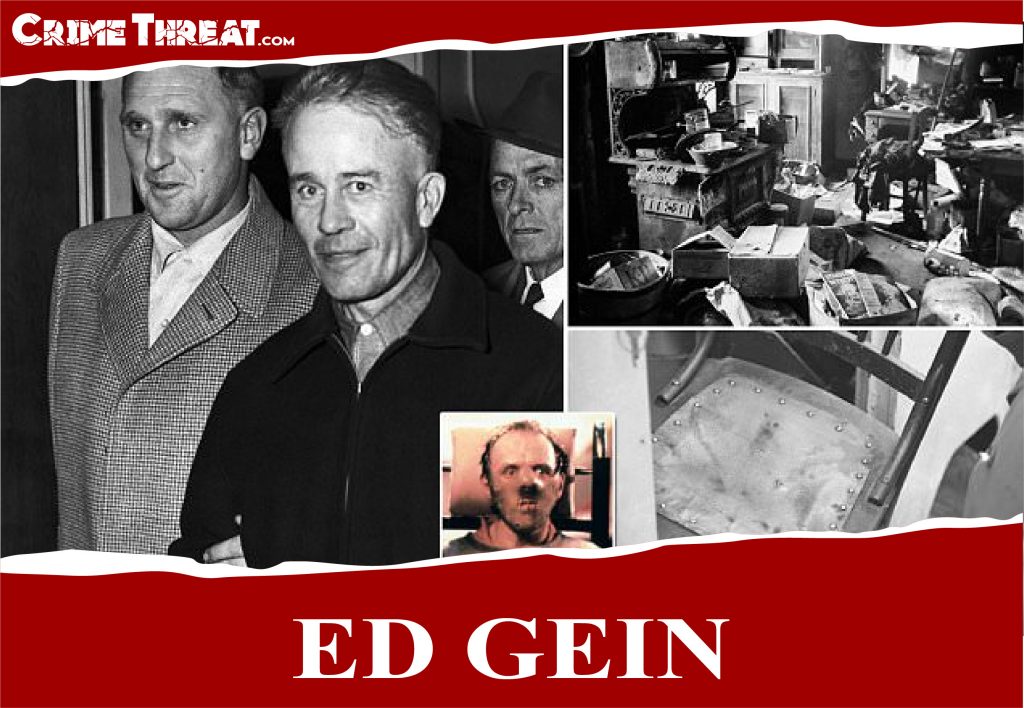 Suddenly the fire raged and was out of their control. Ed Gein’s brother Henry was caught by the fire and died on the spot. The police came to that spot and found his body and stated that Henry’s death was a sudden accident.

Gein promised himself not to leave his mother all alone at home. He mostly spends his time at home and never dated any women. In 1945, Gein’s mother also died, and now Gein Lived all alone at his home. Ed Gein used to clean his mother’s room regularly, while the rest of his house was untidy. Gein learned and developed a unique interest in reading anatomy books. He managed himself as a handyman. Despite Gein’s weird behavior as a babysitter, many residents of his area found disappeared. Tavern owner Mary Hogan was also disappeared as they both frequently meet each other in a nearby pub.

On 16 November 1957, he got Plainfield police’s attention when store owner Bernice Worden was reported missing from her hardware store. Her cash register was also missing from the store counter, and blood spots were identified at her store’s backside. Frank Worden reported to police that his mother was missing, and he directly suspects Gein as he said my mom was seen with him. The authorities went to Ed Gein’s house and saw that Worden’s body was headless, and her body was hanged from the ceiling. After the authorities’ detailed investigation, they got some shocking discoveries from Ed Gein’s house that includes skulls used for serving soups, organs in jars, body parts, etc. Mary Hogan’s body was also found at Gein Farm.

Ed Gein confessed to the murder of Bernice Worden and Hogan when Ed Gein’s arrest by the police. Gein told investigators that he had stolen corpses from the graveyards. Then cut different body parts and made fashionable woman suit and marks from their skin. Practicing necrophilia from these bodies. The authorities also linked Gein to other disappearances and murders which took place in the last few years. William Belter, his lawyer, entered a petition of not being guilty. In the year 1958, he was found unhealthy to stand for any trial. Gein was sent to the Central State Hospital, where he has done different works such as carpenter’s assistant, medical center aide, and a mason.

At the start of the year 1968, Ed Gein was determined healthy and can stand easily for the trial. In that year, Gein was found guilty of killing Worden and Hogan and other gein’s crimes. At the time of Worden’s assassination, he was found criminally insane, and because of this, he was sent to the Central State Hospital.

His lawyer applied for the petition in the year 1974 for Ed Gein’s release, but the court rejected his appeal. Over time, his health was failing, and he was moved to the Mendota Mental Health Institute. Gein died of respiratory illnesses and cancer on 26 July 1984. 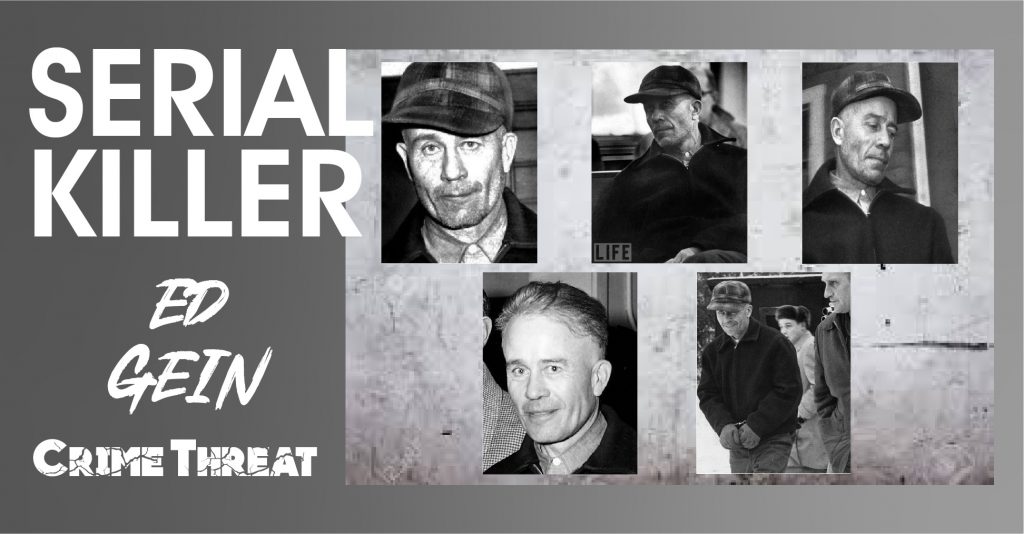 Ed Gein served in different infamous movies as Leatherface (The Texas Chainsaw Massacre) and Buffalo Bill (The Silence of the Lambs). 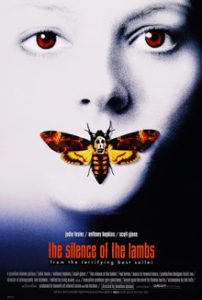 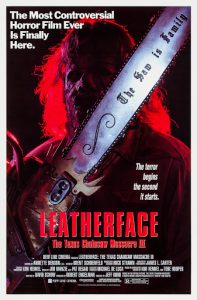 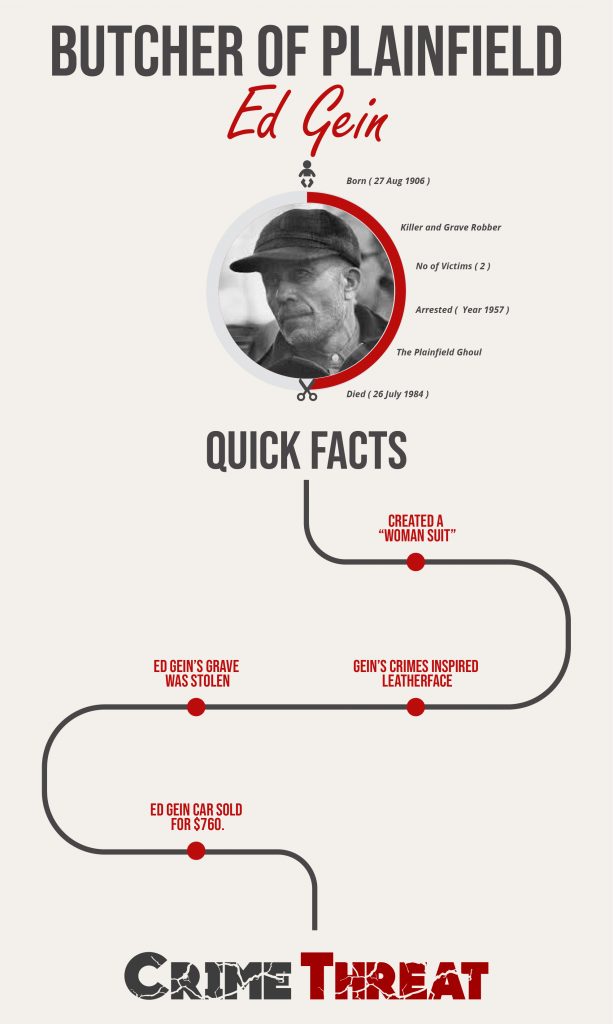