Ivan Robert Marko Milat, a well-known Australian Backpack killer who killed, tortured, and abducted seven backpackers, travelled in Australia between 1989-1992. Milat was sentenced to prison for his whole life and died in prison because of cancer.

Serial killer Ivan Milat was born on the 27th of December 1944 in Guildford, Australia. He was at no 5 out of his 14 siblings. He belongs to a narrow-minded and rural family. Milat’s parents were strict and hard-work, but he had antisocial behavior at an early age. He always takes good care of himself and had a keen interest in guns and hunting. His parents were unable to manage their 14 children, and Ivan, along with his brothers, always had fights with their neighbourhood. Because of this, the Milat family endured several police visits and gave warnings to their sons. 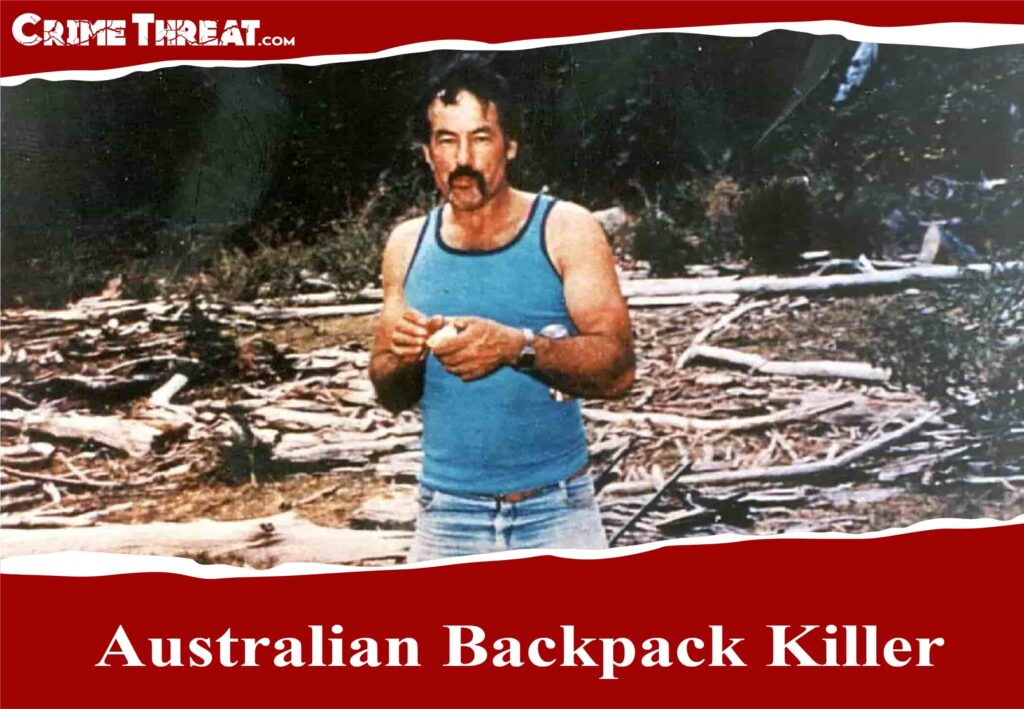 When he was 17-year-old, he was always in trouble with the courts and police. He was charged with several crimes such as armed robbery, car thefts, and housebreaking. In 1971, he was put in jail for the trial as he raped 2 female hikers, but he was cleared from the case as the prosecution was unable to provide evidence against him. On the 25th of January 1990, Milat picked Paul Onions (British Backpacker), who came from Sydney for finding work.

At the start of their conversation, Milat behaved very friendly and asked personal questions regarding his plans from Onions. Onions became worried for his safety and asked him to stop the car. But he pulled out his revolver and asked Onions to stop shouting otherwise;, he will shoot him. But Onions managed to open the car door and jumped. Onions succeeded in flag down a car and went to the police station and told police everything that had happened to him. He left his backpack and other possessions in the car. Onions returned to his country Sydney for replacing his missing passport.

Milat’s first two victims were British backpackers Caroline Clarke and Joanne Walters. They both were found in the zone of “Belanglo State Forest” also famous as Executioners Drop. This locality was near that zone where Millat attacked Paul onions, and that incident happened in the year 1990. Both these girls were missing from May. Milat kidnapped both girls and repeatedly sexually assaulted, and then brutally killed both girls. Milat ran away from the scene, and that is why the police were unable to catch him.

In October 1993, the 2nd set of bodies was also discovered, one was Deborah Everist, and another was James Gibson. They both were Australian nationals and have gone missing since 1989. When the police examined their bodies, it was the same as two British Victims Joanne Walters and Caroline Clarke. The post-mortem stated that it was the same killer and both crime scene resemblances were the same. Clive Small took the overall charge of both these cases and started the investigation. During their search in the Belanglo State Forest zone, the investigation team found another victim’s body on 1 st November. Simone Schmidl (German national) had been missing, and her missing report was filed in January 1991. She also came here to search for work. The crime scene and evidence were the same that describes the same killer who did this murder.

The comprehensive search was on its way, and the team found two more victims Anja Habschied along with her boyfriend. They both were German nationals and were missing in 1991 after Christmas. Both were shot by the killer many times, and strangled marks also appeared on their bodies.

Clive Small (Superintendent) told the media that we were looking for the serial killer who did all these seven backpackers’ murders. The techniques used in these murders included decapitation, stabbing, shooting, sexual assault, strangulation, and beating. The police also investigated Ivan Milat and his family because they were living near the crime scene. But no evidence was found from their family as well. The Australian and international media took an interest. They got a significant breakthrough when Onions communicated to the Australian authorities and told about his incident and how he escaped from there.

Paul Onions came to Australia, and he recognized Milat from a video clip. Police went to his house and the search warrant, where Ivan Milat’s home revealed a massive number of signs linked to all the murders. This evidence includes camping equipment, sleeping bags, ammunition, clothes, and so on. Police also found some weapons that have a curved and long sword and a .22 caliber rifle. 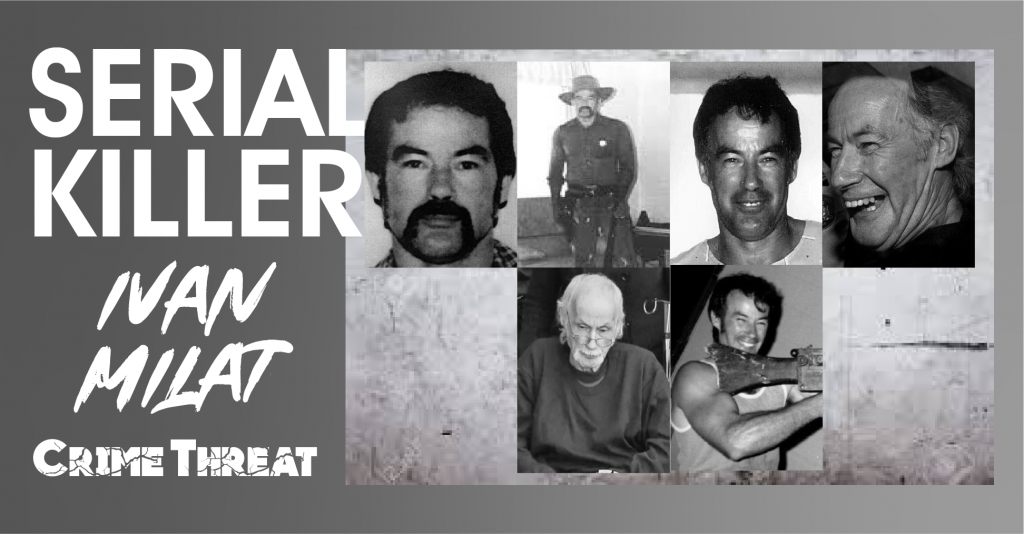 Police arrested Ivan Milat backpacker killer and took him to their custody for further questioning. From the start, he was uncooperative and evasive. But his ballistic proof matched his gun, which he used in these seven murders. He was on trial many times, but he always denied doing these murders. On the 27th of July 1996, the jury found Milat guilty and sentenced him to prison for killing 7 backpackers, and all the proof were against him. Ivan Milat died on the 27th of October 2019 because of stomach cancer. 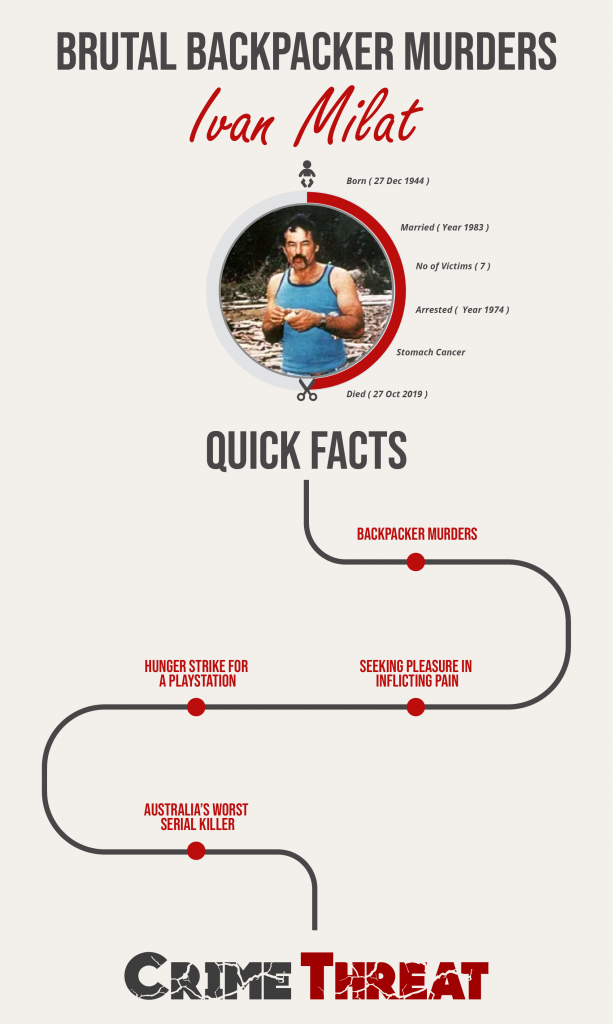