John Wayne Gacy is known as the U.S’s worst serial killer who murdered and sexually assaulting 33 teenage boys. He did all these murders in Cook County, Illinois, and buried most of them under his home. Other corpses were recovered by the police from the neighbouring Des Plaines River. He was also famous as “Killer Clown” as he loves to wear clown dresses and makeup. He had offensive childhood and had a problem with homosexuality. In the year 1968, he was sentenced to jail for doing young men rape when police get to know about the murders.

John Wayne Gacy was born on 17th March 1942, in Chicago, Illinois. His father was an alcoholic who beat John Gacy and his siblings. Not only this, but his dad physically assaulted his mom as well. In an interview, Gacy’s sister told the media that her father beats Gacy regularly which made him tougher and he would never cry after being beaten by his father. During his schooling, John was not able to play with his class fellows due to his congenital heart problem. With the passage of time, Gacy realized that he likes to spend more of his time with young men and loves to have a sexual relationship with them.

During the 1960s, John Gacy worked as a fast-food chain supervisor, and later on, he started his business as a building contractor. In the 1970s, he was working in the Chicago suburbs as Democratic precinct captain. John Wayne was proactive in different political organizations and events plus organized social gatherings as well. Gacy married twice but his marriage didn’t work for a longer time. He had 2 biological kids and 2 stepdaughters.

Jolly Joker is a clown club located in the Chicago area where John acts in clown makeup and attire. He performed in different events, charity fundraisers, and children’s parties. Gacy was famous for the name Clown. He lured his targets by helping in their construction work or through other tricks. Gacy invited his victims and after that sexually assaulted and tortured them. He also strangled most of the victims with the help of rope and his hands. After some years, one day he was having a conversation with some detectives and Gacy was under their surveillance. He told them about his work as a joker.

In the year 1968, he was found guilty and sentenced to prison for 10 years for brutal sexual assault with 2 teen boys. Gacy was released on bail in the year 1970. In the same year, again he did rape a teen boy and got arrested by the sheriffs. Later on, the case was dropped because that teen didn’t appear in court. Wayne raped 2 teenage boys in mid of the 1970s. On 11 December 1978, Robert Piest a 15-years-old boy went missing from a drugstore. When the police started an inspection, they get to know that Piest was seen with his mom at a pharmacy. Piest worked in the pharmacy where he meets Wayne and discusses him for a new job in his construction business. 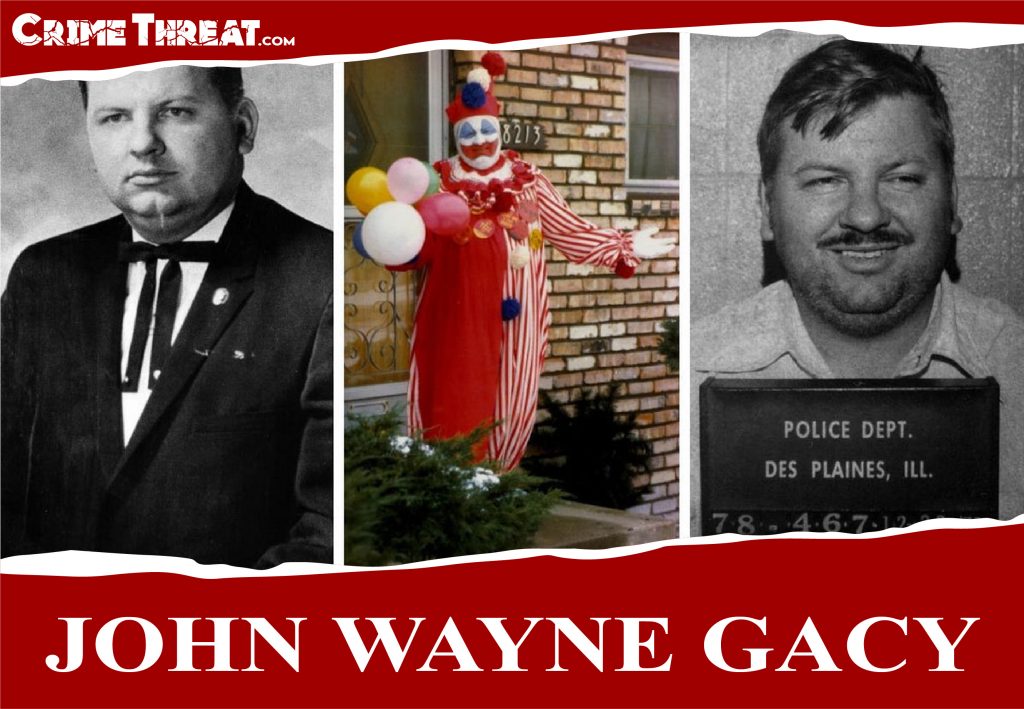 After a few years, sheriffs get to know that Gacy was involved in different cases. Police searched Gacy’s home in Norwood Park, where they found Gacy’s victims bodies and uncovered evidence for different murders. During the investigation, police get to know that in the year 1972, Gacy killed his first victim. His name was Timothy McCoy he was just 16-years-old. After a long procedure of police investigation and surveillance, they get to know that John Wayne Gacy victims are more than 30.

Trial and Execution Of Clown Gacy

On 6 February 1980, Gacy’s trial began and he confesses his all crimes. He also told the sheriffs about his mental health. He further said to the police that he did 33 murders. John Wayne Gacy is famous and includes in the list of the U.S’s most cruel serial killers. Court sentenced Gacy’s to 21-year natural life sentences and twelve deceases sentences.

He was apprehended at Menard Correctional Center located in Illinois for a decade and continuously applied for the appeal. When he was in jail, he also denied murder charges and recorded his statement on a phone call in which he told about his innocence.

He was died on 10 May 1994 by lethal injection at Stateville Correctional Center in Crest Hill. 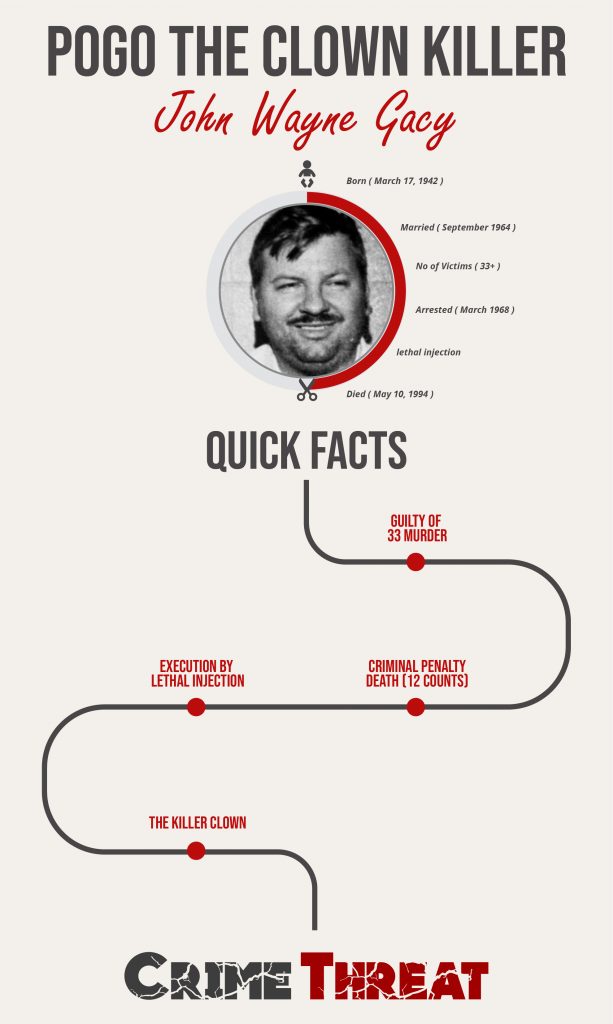 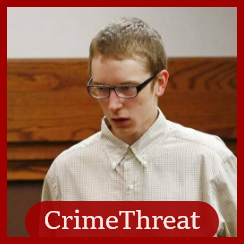